The North Dakota Corn Utilization Council (NDCUC) was created in 1991 and consists of 7 members representing seven districts. The NDCUC oversees how North Dakota’s corn checkoff dollars are spent on research, education, and promotion of corn and corn products. Per the NDCUC election schedule, the 2021 spring election included board members and county representatives in District 6 and 7.

County representatives are elected by producers of the county they live in. The elections are based on a 4-year rotation. The North Dakota State University Extension is required by the North Dakota Century Code to conduct elections for the Corn Council. County elections may be held in conjunction with an event such as a county crop improvement day or as a separate meeting. County extension agents conduct the elections and canvass the votes. After being elected a county representative, the representative from each county in the 7 Corn Council districts shall elect one amongst themselves to serve as the Corn Council member from that district. Information from https://www.ag.ndsu.edu/ext-employees/commodity-elections

Individuals elected or re-elected in 2021 to represent their county in Districts 6 and 7 are as follows: 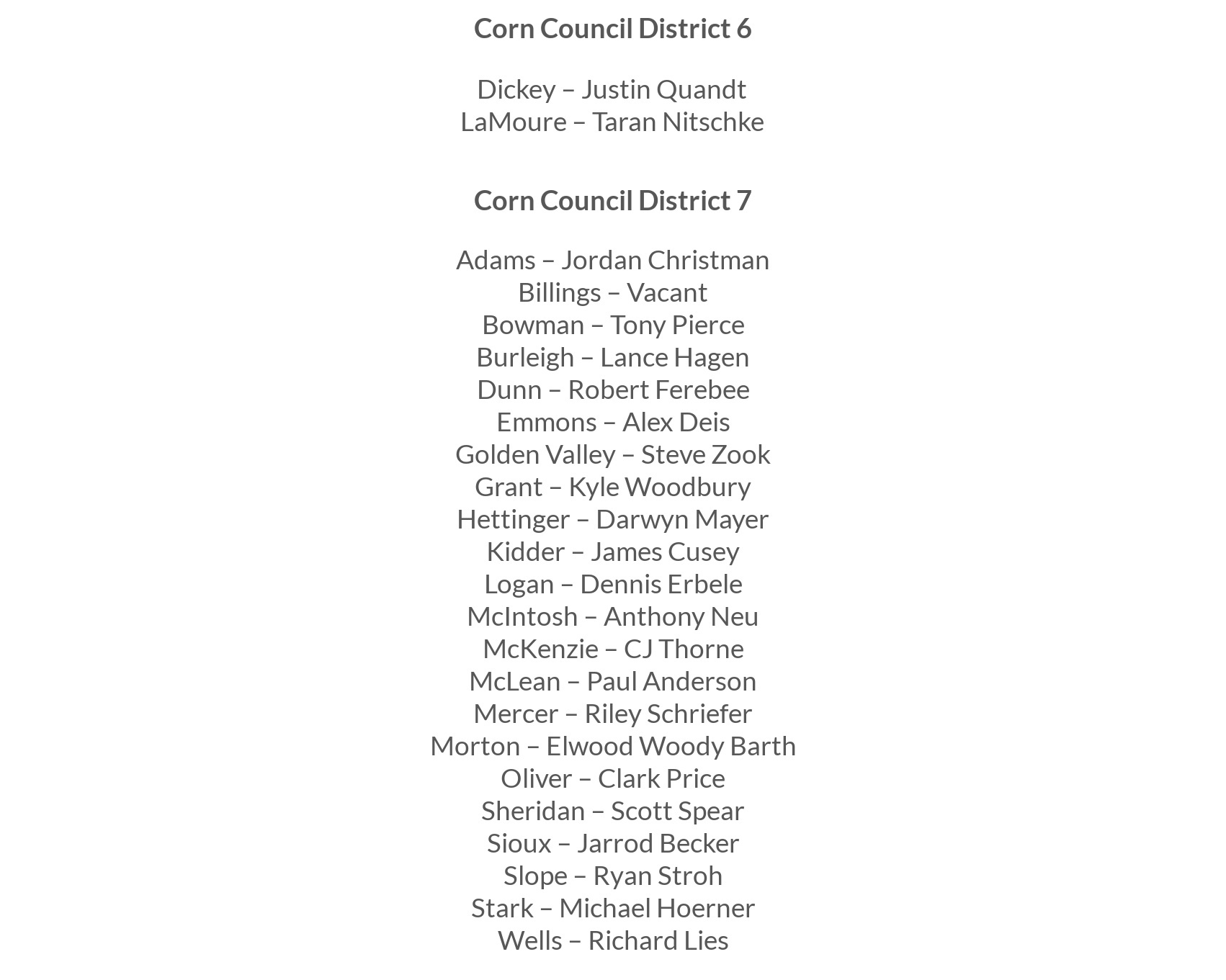 County representatives elected by their peers are eligible to serve two consecutive 4-year terms on the North Dakota Corn Utilization Council board.

At the NDCUC District 6 election on March 16, 2021, Justin Quandt was elected to his first term by his peers to serve ND corn producers on the NDCUC board. Justin, who farms with his father, brothers, and four uncles, is a corn and soybean producer from Oakes, ND. The Quandt family also raises beef cattle and owns a hog finishing operation near Oakes. He and his wife, Abbey, have two sons. 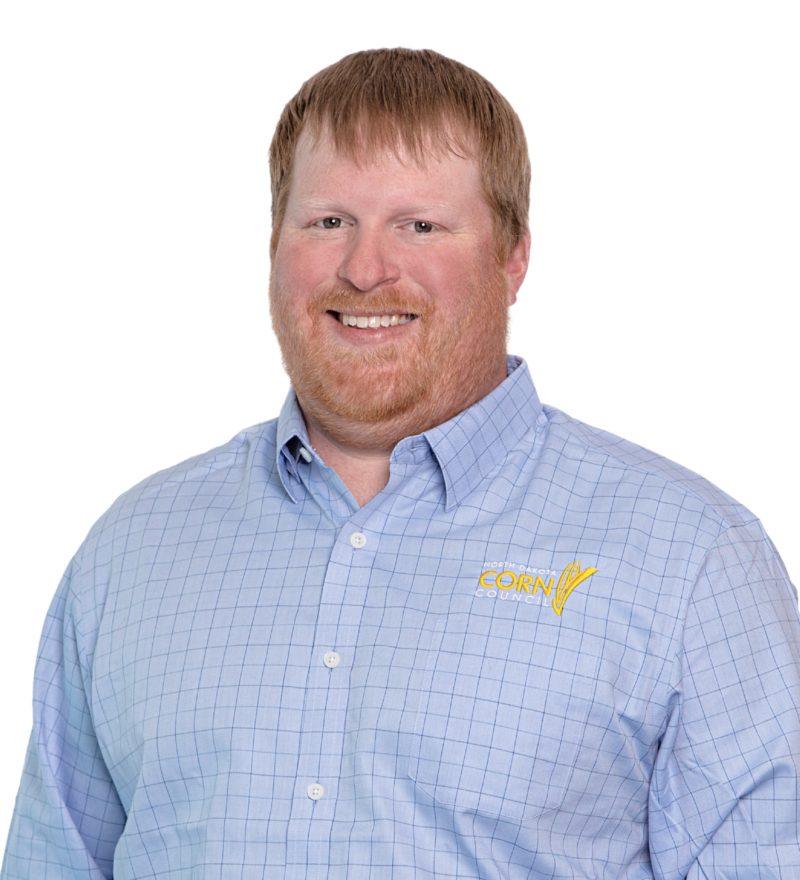 Justin Quandt of Oakes, ND was elected by his peers to represent District 6 on the North Dakota Corn Utilization Council board

Justin is excited to participate in North Dakota Corn Council activities, including participating on a U.S. Grains Council Advisory Team, and looks forward to meeting with end-customers worldwide. “I am honored to have the opportunity to serve my fellow corn producers from Dickey and Lamoure County in this role on the Council,” states Quandt. “I know how important check-off funded programing is for a corn producer’s bottom line, especially when it comes to market development and trade. I am looking forward to doing my part to advance the mission of the NDCUC, locally and nationally, as well as internationally in coordination with partnering organizations.”

At the NDCUC District 7 election on March 17, 2021, Robert Ferebee was re-elected to a second term by his peers to serve ND corn producers on the NDCUC board. Ferebee, Halliday, ND, farms with his father, Cliff, and two of his sons, Kyle and Clay. The Ferebee farm and ranch raises a variety of crops including corn, winter and spring wheat, canola, soybeans, pulse crops like peas and lentils, and a few specialty crops. They keep busy with a cow and calf operation as well. 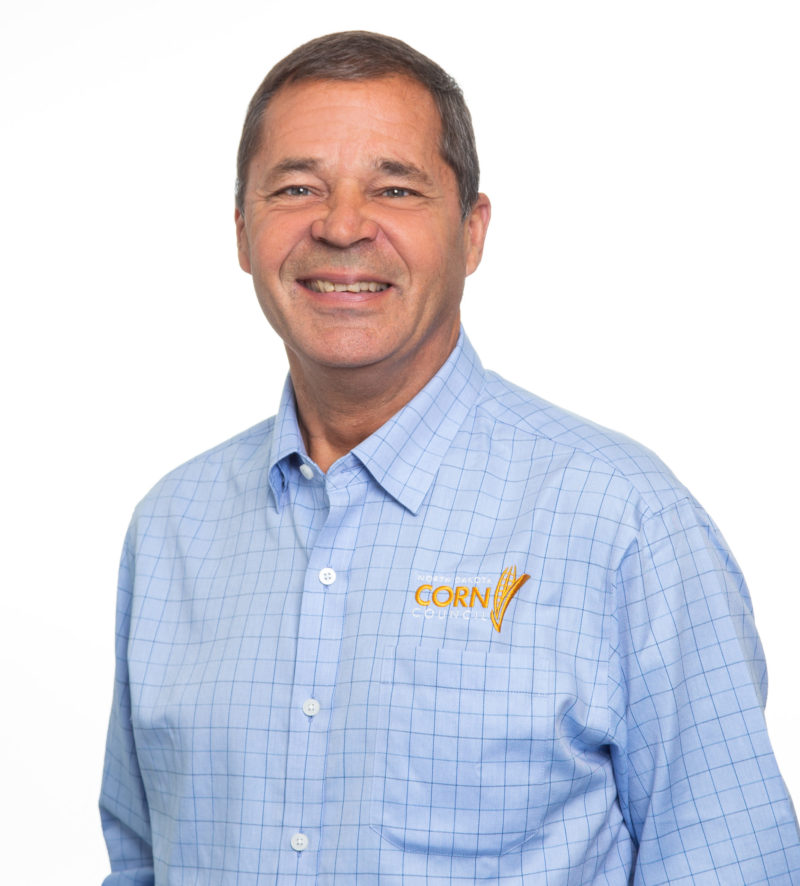 Robert Ferebee of Halliday, ND was re-elected by his peers to represent District 7 on the North Dakota Corn Utilization Council

Ferebee is excited about the opportunity to help fellow farmers understand the value of the corn check-off in North Dakota. “Understanding how the check-off program works in our state and being a part of the allocation of checkoff funds to support research, market development, education, and promotion of corn in all forms allows me to be a better advocate for farmers statewide,” says Robert. “Additionally, the North Dakota Corn Utilization Council plays a role in finding value-added uses for corn – whether in livestock feeding, ethanol and exports – through research at Universities in our home state and international export organizations. It is rewarding to be a part of that industry cooperation.”

NDCUC County Representatives and Board Members in District 6 and 7 will begin their terms on April 1, 2021. These positions will be eligible for election in 2025. A full listing of the North Dakota Corn Utilization Council Board can be found HERE and North Dakota Corn Utilization Council District Representatives can be found HERE.